Why does this page load so fast?

Blazor WASM enables reuse of C# skills, tooling & libraries offers a compelling advantage for .NET teams, so much so it's become our preferred technology for developing internal LOB applications as it's better able to reuse existing C# investments in an integrated SPA Framework utilizing a single toolchain.

It does however comes at a cost of a larger initial download size and performance cost resulting in a high Time-To-First-Render (TTFR) and an overall poor initial User Experience when served over the Internet, that's further exacerbated over low speed Mobile connections.

This is likely an acceptable trade-off for most LOB applications served over high-speed local networks but may not be a suitable choice for public Internet sites (an area our other jamstacks.net templates may serve better).

As an SPA it also suffers from poor SEO as content isn't included in the initial page and needs to be rendered in the browser after the App has initialized. For some content heavy sites this can be a deal breaker either requiring proxy rules so content pages are served by a different SEO friendly site or otherwise prohibits using Blazor WASM entirely.

The solution to both issues is fairly straightforward, by utilizing the mainstay solution behind Jamstack Frameworks and prerender content at build time.

We know what needs to be done, but how best to do it in Blazor WASM? Unfortunately the official Blazor WASM prerendering guide isn't actually a prerendering solution, as is typically used to describe Static Site Generators (SSG) prerendering static content at build-time, whilst Blazor WASM prerendering docs instead describes a Server-Side-Rendering (SSR) solution mandating the additional complexity of maintaining your Apps dependencies in both client and server projects. Unfortunately this approach also wont yield an optimal result since prerendering is typically used so Apps can host their SSG content on static file hosts, instead SSR does the opposite whose forced runtime coupling to the .NET Server Host prohibits Blazor WASM Apps from being served from a CDN.

As this defeats many of the benefits of a Blazor WASM Jamstack App in the first place, we've instead opted for a more optimal solution that doesn't compromise its CDN hostability.

We've little opportunity over improving the startup time of the real C# Blazor App beyond hosting its static assets on CDN edge caches, but ultimately what matters is perceived performance which we do have control over given the screen for a default Blazor WASM project is a glaring white screen flash: 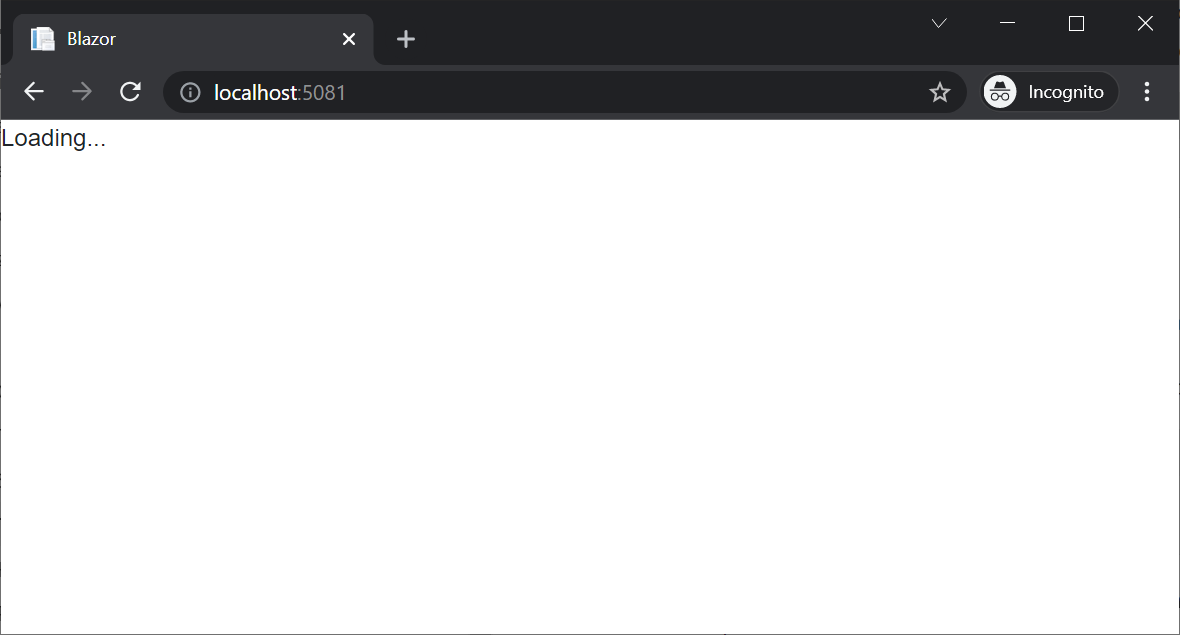 The longer users have to wait looking at this black loading screen without signs of progress, the more they'll associate your site with taking forever to load.

One technique many popular sites are using to increase perceived performance is to use content placeholders in place of real-content which gives the impression that the site has almost loaded and only requires a few moments more for the latest live data to be slotted in.

But we can do even better than an inert content placeholder, and load a temporary chrome of our App. But as this needs to be done before Blazor has loaded we need to implement this with a sprinkling of HTML + JS.

First thing we need to do is move the scoped styles of our Apps MainLayout and NavMenu into an external main-layout.css so our temp App chrome can use it.

Then in our /wwwroot/index.html anything between <div id="app"></div> is displayed whilst our Blazor App is loading, before it's replaced with the real App.

So Here we just paste in the MainLayout markup:

Less our App's navigation menus which we'll dynamically generate with the splash of JS below:

Which takes care of both rendering the top and sidebar menus as well as highlighting the active menu for the active nav item being loaded, and because we're rendering our real App navigation with real links, users will be able to navigate to the page they want before our App has loaded.

So you can distinguish a prerendered page from a Blazor rendered page we've added a subtle box shadow to prerendered content which you'll see initially before being reverting to a flat border when the Blazor App takes over and replaces the entire page:

With just this, every page now benefits from an instant App chrome to give the perception that our App has loaded instantly before any C# in our Blazor App is run. E.g. here's what the Blazor Counter page looks like while it's loading: 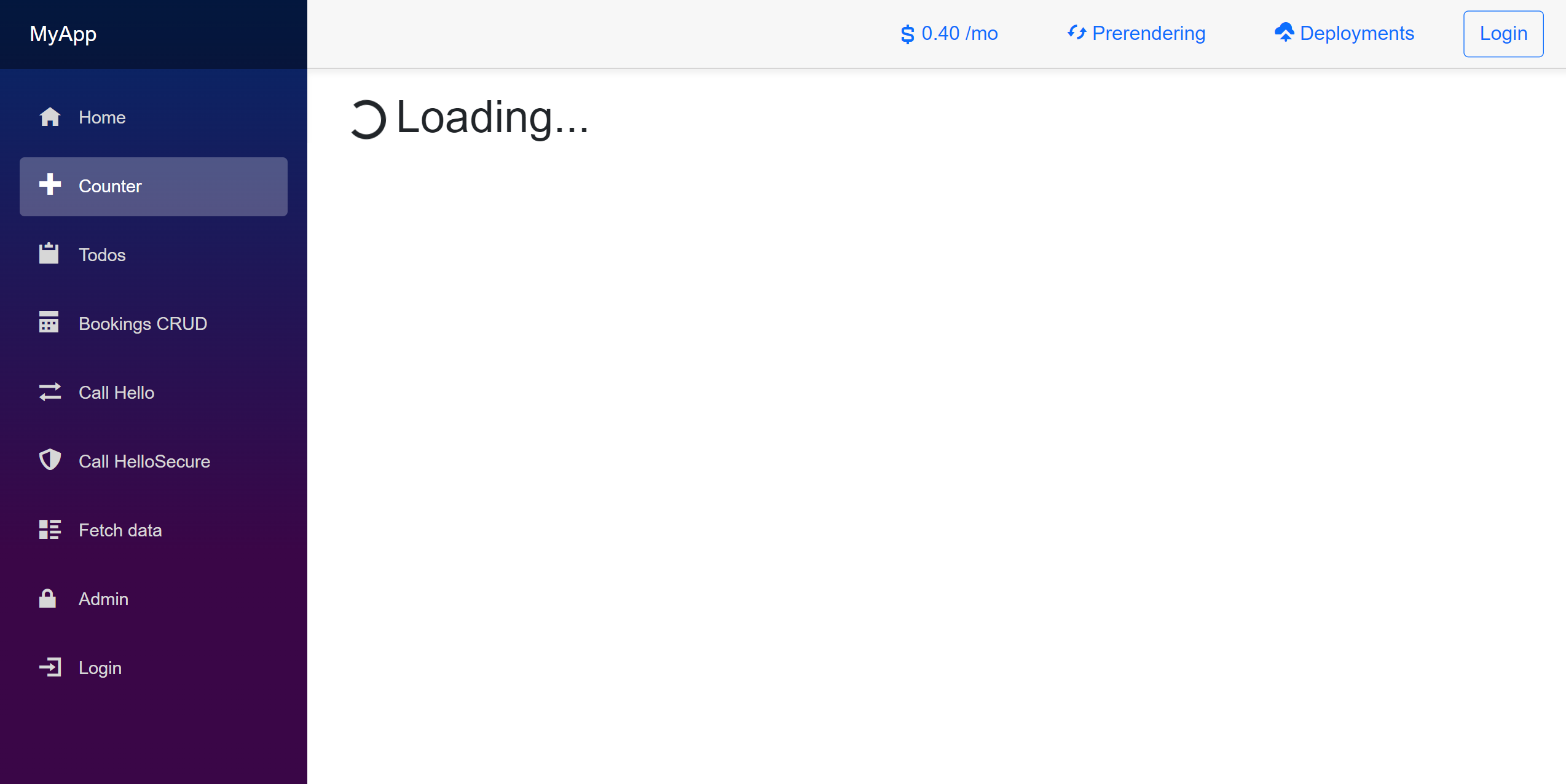 If you click refresh the /counter page a few times you'll see the new loading screen prior to the Counter page being available.

Our App is now in a pretty shippable state with decent UX of a loading page that looks like it loaded instantly instead of the "under construction" Loading... page from the default Blazor WASM project template.

It's not quite a zero maintenance solution but still fairly low maintenance as only the SIDEBAR and TOP csv lists need updating when add/removing menu items.

We'll now turn our focus to the most important page in our App, the Home Page which is the page most people will see when loading the App from the first time.

With the above temp App chrome already in place, a simple generic pre-rendering solution to be able to load any prerendered page is to check if any prerendered content exists in the /prerender folder for the current path, then if it does replace the default index.html Loading... page with it:

We now have a solution in place to load pre-rendered content from the /prerender folder, but still need some way of generating it.

The solution is technology independent in that you can you use any solution your most comfortable with, (even manually construct each prerendered page if preferred), although it's less maintenance if you automate and get your CI to regenerate it when it publishes your App.

Which ever tool you choose would also need to be installed in your CI/GitHub Action if that's where it's run, so we've opted for a dependency-free & least invasive solution by utilizing the existing Tests project, which has both great IDE tooling support and can easily be run from the command-line and importantly is supported by the bUnit testing library which we'll be using to render component fragments in isolation.

To distinguish prerendering tasks from our other Tests we've tagged PrerenderTasks.cs with the prerender Test category. The only configuration the tasks require is the location of the ClientDir WASM Project defined in appsettings.json that's setup in the constructor.

The Render<T>() method renders the Blazor Page inside a Bunit.TestContext which it saves at the location specified by its @page directive.

Being a unit test gives it a number of different ways it can be run, using any of the NUnit test runners, from the GUI integrated in C# IDEs or via command-line test runners like dotnet test which can be done with:

To have CI automatically run it when it creates a production build of our App we'll add it to our Host .csproj:

Which allows GitHub Actions to run it when it publishes the App with:

Now when we next commit code, the GitHub CI Action will run the above task to generate our /prerender/index.html page that now loads our Home Page instantly! 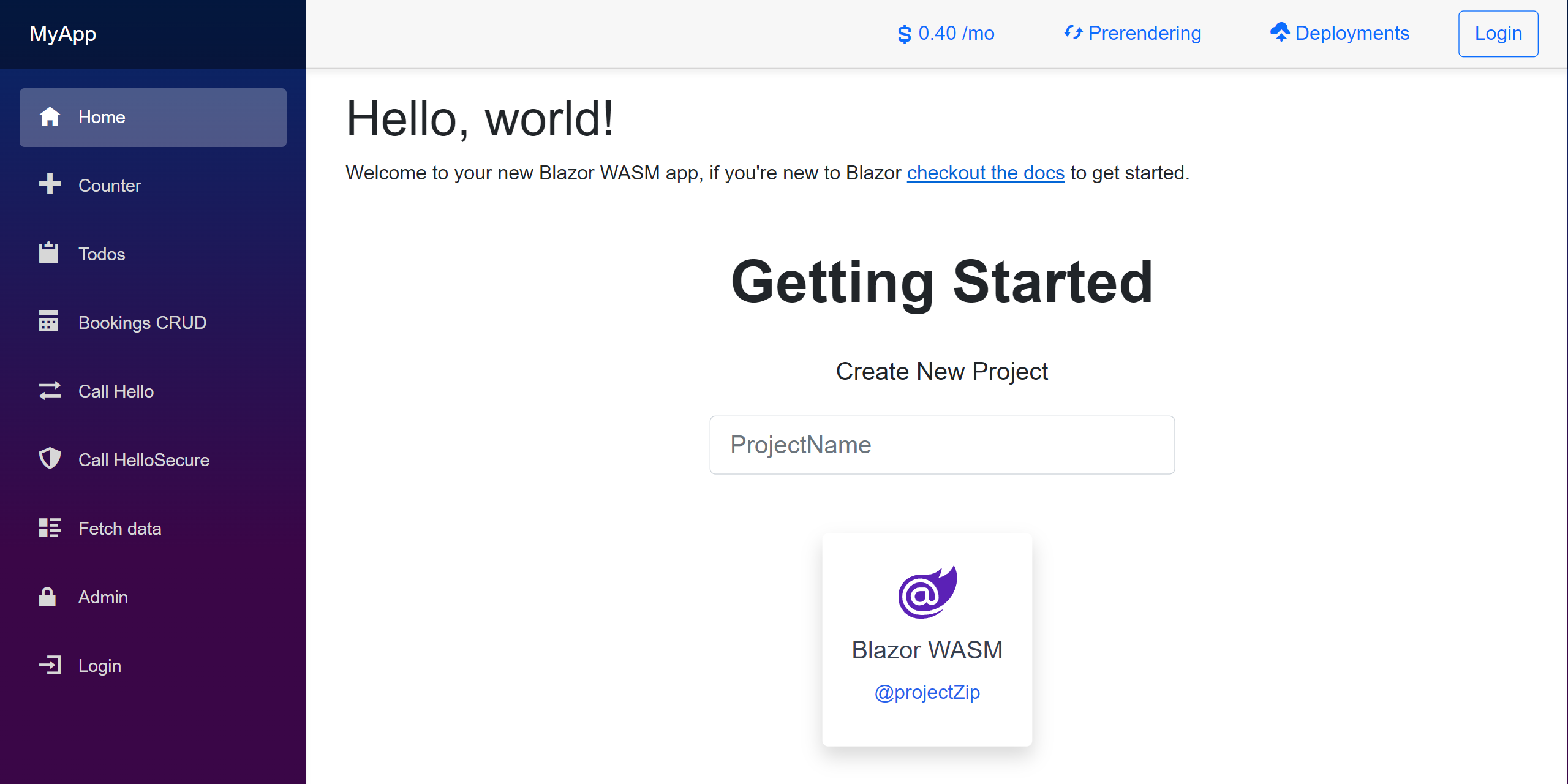 The only issue now is that the default Blazor template behavior will yank our pre-rendered page, once during loading and another during Authorization. To stop the unwanted yanking we've updated the component to instead load the prerendered page content if it's for the current path:

Whilst to prevent yanking by the Authorization component we'll also include the current page when rendering the alternate layout with an Authenticating... text that will appear under the Login/Logout buttons on the top-right:

This last change brings us to the optimal UX we have now with the home page loading instantly whilst our Blazor App is loading in the background that'll eventually replace the home page with its identical looking C# version except for the box-shadow under the top navigation so you can tell when you're looking at the pre-rendered version instead of the C# Blazor version.

The other pages that would greatly benefit from prerendering are the Markdown /docs/* pages (like this one) that's implemented in Docs.razor.

However to enable SEO friendly content our fetch(/prerender/*) solution isn't good enough as the initial page download needs to contain the prerendered content, i.e. instead of being downloaded in after.

To do this our PrerenderMarkdown Task scans all *.md pages in the content directory and uses the same /MyApp.Client/MarkdownUtils.cs implementation Docs.razor uses to generate the markdown and embeds it into the index.html loading page to generate the pre-rendered page:

Whilst the wwwroot/index.html is parsed with PageTemplate above who uses the resulting layout to generate pages within <!--PAGE--><!--/PAGE--> markers.

After it's also executed by the same MSBuild task run by GitHub Actions it prerenders all /wwwroot/content/*.md pages which are written to the /wwwroot/docs/*.html folder.

This results in the path to the pre-generated markdown docs i.e. /docs/prerender having the exact same path as its route in the Blazor App, which when exists, CDNs give priority to over the SPA fallback the Blazor App is loaded with.

It shares similar behavior as the home page where its pre-rendered content is initially loaded before it's replaced with the C# version once the Blazor App loads. The difference is that it prerenders "complete pages" for better SEO & TTFR.

Why does this page load so fast?

So to answer the initial question, this page loads so fast because a prerendered version is initially loaded from a CDN edge cache, i.e. the same reason why Jamstack.org SSG templates like our modern nextjs.jamstacks.net and vue-ssg.jamstacks.net exhibit such great performance and UX out-of-the-box.

We hope this technique serves useful in greatly improving the initial UX of Blazor Apps, a new Blazor App with all this integrated can be created on the Home Page